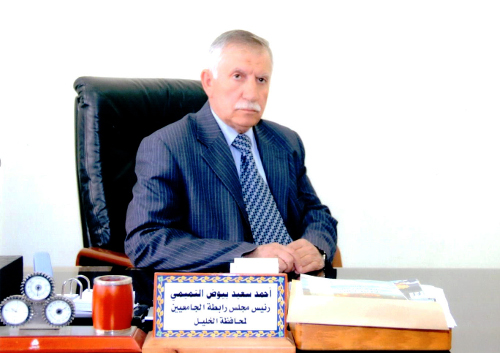 Nowadays, science and education seem to be inseparable elements of the prosperity of any human civilization. They benefit people and equip them with the essential factors that guarantee they will achieve all their goals and ambitions, learn from the experiences of others, be open and able to respond effectively to social changes, and more importantly, keep integrity and morality.

Hence, the UGU was established in Hebron and its founders had a profound belief that this institution will be fruitful and successful, serving not only the people of Hebron but also all the people of Palestine, the Arab World and Muslims everywhere.

This pioneering foundation has had nineteen successive administrative bodies since its establishment in 1953 until the present time. Through periodic elections, every two years or more, depending on the necessities of the social and political circumstances, these bodies have been administratively managed. As there have been urgent projects to be accomplished, the successive administrative bodies did have to carry out these projects to keep up with the ongoing development. In addition, it appeared to be urgent to make such necessities available so that the UGU will be the beacon for the coming generations, achieve their aspirations and ambitions, and equip them with what is need to cope in this rapidly-changing epoch.

It is worth noting that the beginnings of the UGU activities were modest, manifested in funding students who were studying at the Arab World universities. After that, it took the decision to adopt the Egyptian Tawjihi in 1955 and established a public library for those wishing to take advantage of the book (What book??). The establishment of the Engineering Polytechnic Institute in 1978 has represented the cornerstone and the first step on the runways of engineering Sciences. Students were awarded a three-year diploma in the following disciplines: Architectural Engineering, Civil Engineering, Electrical Engineering and Mechanical Engineering. Committing to the administrative body’s aspirations and ambitions expressed in each session and responding to the need for development and collaboration of employees, the UGU has become Palestine Polytechnic University (PPU) with five colleges having various disciplines:

3. College of Administrative Science and Informatics

As owning buildings is essential for the learning process, the administrative bodies, particularly the current body built their own premises instead of the rented ones. It maintained a building in the area of Abu Rumman which includes Fawzi Ka’wash Center of IT Excellence and the Continuing Education Department. They also have modern buildings in Wadi Hariya which houses all the university faculties and a mosque on campus open for the public . In addition to this, the Jbaiha project in Amman, which used to serve as a lodging or accommodation for students studying at the University of Jordan, has been recently turned to a building of several floors. It is aimed to be a source of income for the UGU and Palestine Polytechnic University (PPU) alike.

The UGU always looks forward to the ongoing development and keeping pace with what is happening in the world of technology, management, planning and finance. Therefore, it has introduced the Department of Administration and Finance. It also vouches for transparency in the administrative and financial matters, supported by the Financial Advisory Center which follows up the financial procedures with the Department of Finance and Control.

This is the University Graduate Union; from the moment it saw light up till now ; it has always thrived to be modern and updated, and looked forward to a brighter future with rather, professional, interactive, and innovative community.

Chairman of Trustees Board