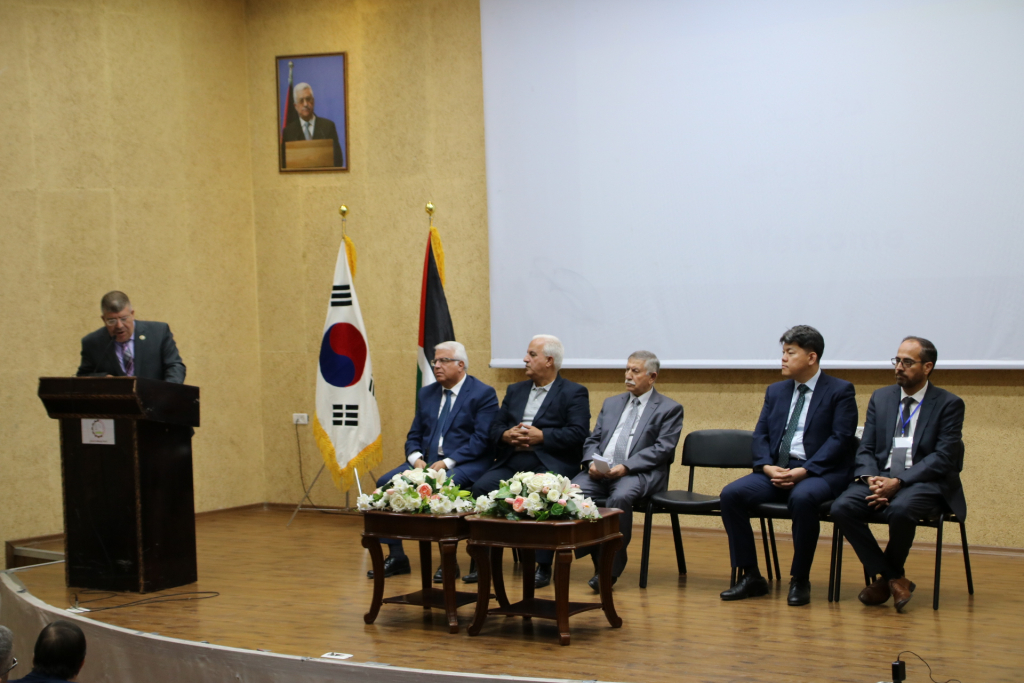 The Palestine Polytechnic University (PPU) organized the official opening ceremony ofthe Palestine Korea Biotechnology Center, which was built and equipped with the generous support of the Government of the Republic of Korea. The opening ceremony was attended by a large number of dignitaries and representatives of local and international organizations. The Korean side was represented by his Excellency the Ambassador of the Republic of Korea, Mr. Dong-Gi Kim, and the Director of the Korea International Cooperation Agency (KOICA) in Palestine, Mr. Jeong-Shin Cho. While the Palestinian side was represented by his ExcellencyMr. Ahmed Saeed Al-Tamimi(Chairman of the Board of Trustees), General JebreelAlbakree (Hebron governor), Dr. Imad Al-Khatib(President of the University) and his deputies, faculties’ deans, and academic staff of PPUalong with a large number of representatives of governmental institutions, civil society, national, community, private sector and businessmen in the province.

After playing the national anthems of Korea and Palestine, HE Ahmed Al-Tamimi congratulated the guests and praised the friendly relations and cooperation with the Republic of Korea and the generous support provided to the Palestinian people at all levels. HE Al-Tamimi stressed the University's vision of adopting scientific research as an important pillar for development, which seeks to solve local problems and promote the Palestinian economy.

In his speech, the director of the Palestine Korea Biotechnology Center, Dr. Yaqoub Al-Ashhab, presented an overview about the project and the center. Al-Ashhab noted that the center started as a small research unit under the Deanship of Scientific Research in 2006 with a grant from the Quality Improvement Fund. The small unit has proved its success during the first years through the implementation of distinctive projects and the provision of quality training packages. In addition it has worked to develop a master program in biotechnology in partnership with the University of Bethlehem, which formed the first model and a success story of academic partnership between the Palestinian universities. The unit culminated in these successes to obtain the support of the Korean government to turn the unit into a national center entitled “Palestine Korea Biotechnology Center”. The Center is working with several national partners to conducttraining programs,research projects, and produce and develop technologies that responds to the vital needs of the Palestinian society in the fields of health and medical biotechnology, animal health and agricultural biotechnology and development. The Center aims to transfer and develop the latest advancements in the fields of biotechnology. Furthermore, the center focuseson providing high quality educational and training programs for postgraduate students and technical staff and carrying out applied research projects to meet urgent needs in the Palestinian market. Dr. Al-Ashhab also praised the efforts made by the staff of the Center to establish a distinguished network with numerous international research institutes that extend from Korea in the east and throughseveral European countries to reach the United States of America in the west.

In his speech, the Director of the Representative Office of the Korean Agency for International Cooperation in Palestine expressed his happiness with the completion of this important project, which reflects the interest of the Korean Agency for International Cooperation in quality projects in Palestine. He pointed to the large number of projects that have been implemented by the Agency across all Palestinian provinces. These project included youth innovation centers, health centers, training and development centers as well as the KOICA’s support to many ministries. Mr. Cho praised the importance of this project as a high qualityproject focused on strengthening the knowledge-based economy.

HE the Ambassador of the Republic of Korea, Mr. Don-Gi Kim, delivered a speech in which he stressed the depth of the friendly relations between the people of the Republic of Korea and the Palestinian people. He emphasizes the need to support the developing countries through targeted development programs. The Ambassador expressed his happiness with the completion of this project that holds the name of the two countries "Palestine and Korea" represented a global research center. HE Mr. Gi stressed that the Republic of Korea's strategy will always be consistent with the Millennium Development Goals adopted by the United Nations.

At the end of the ceremony, the President of PalestinePolytechnic University, Dr. Imad Al-Khatib, delivered a speech in which he welcomed the guests of the university and expressed his sincere thanks to the Republic of Korea and the Korean people and the Korea International Cooperation Agency for their continuous support to the Palestinian people. Dr. Khatibpointed to the vision of being the leading university withone of the best research centers at the national and regionallevel, where researchers were able to attract quality projects in many vital areas, and praised strong relations with KOICA, looking forward to more cooperation. Dr. Al-Khatib also thanked the senior donors.

At the end of the ceremony, the Ambassador of the Republic of Korea and Mr. Tamimi, accompanied by the guests, cut the opening ribbon of the project and removed the curtain from the stone plaque of the project. The staff of the center, including senior researchers, technical staff and students of higher education, took the guests on a guided tour of the laboratories and units of the center. During the tour, many graduate students presented summaries of the results of their research and the most prominent scientific and cognitive findings. Scientific publications issued by the staff of the Center and published in scientific journals with a prestigious ranking globally.The guests also visited the conference auditorium in the Center that is named after a leading figure of industry in Hebron Mr. Mohammad SadeqNeiroukh. The auditorium was furnished with a generous donation from the sons of the late MohammedSadeqNeiroukh. The guests also visited the wing of the graduate studies wing in the center, which is named after one of the leading figures in the Palestinian leadership, Mr. Mohammed Mahmoud Masrouji, who is the founder and chairman of Jerusalem Pharmaceuticals Company.