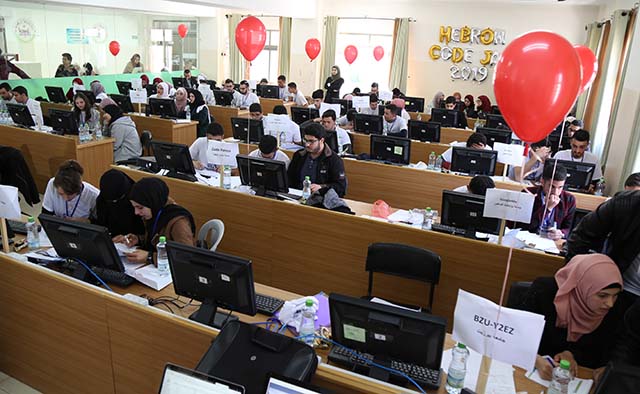 The participating teams from the College of Information Technology and Computer Engineering at Palestine Polytechnic University received the first and the second places in the Code Jam–Hebron National Programming Competition 2019. The competition was held at Hebron University during the  Science and Technology Week and the participation of more than 20 teams from different Palestinian universities.

The winning team 7UP ( Khaled Ju'beh, Mohammad Natsheh and Mohammad Shaloudi) has received the  first place, while the second place has gone to the GoogleMe team (Waleed Ju'beh, Basel Atawneh and Ameer Takrouri). Both teams were supervised by the coach: Eman Sharabati.

It is noteworthy that the Hebron Code Jam 2019 competition simulates the International Programming Competition (ACM-ICPC ), one of the most important programming competitions in the world. It was founded in 1978 and is held annually in most countries of  the world. It targets the university students, who compete in teams representing their universities; each team consists of three students. The criteria for winning differs according to the students' scientific level, the ability to analyze and design, in addition to solving algorithm using one of the programming languages ( C , C++ , Java or Bython) with the ability to save time, distribute tasks and collaborate among the work team members.

The students of the College have achieved remarkable achievements in all the competitions and scientific forums they participated in due to the quality of the outstanding students and the training provided  by the college and the interest of the university administration. The college has adopted an entrepreneurial approach in training and building the new students' abilities in addition to providing the graduates with the necessary skills to maintain the outstanding level and high skills.