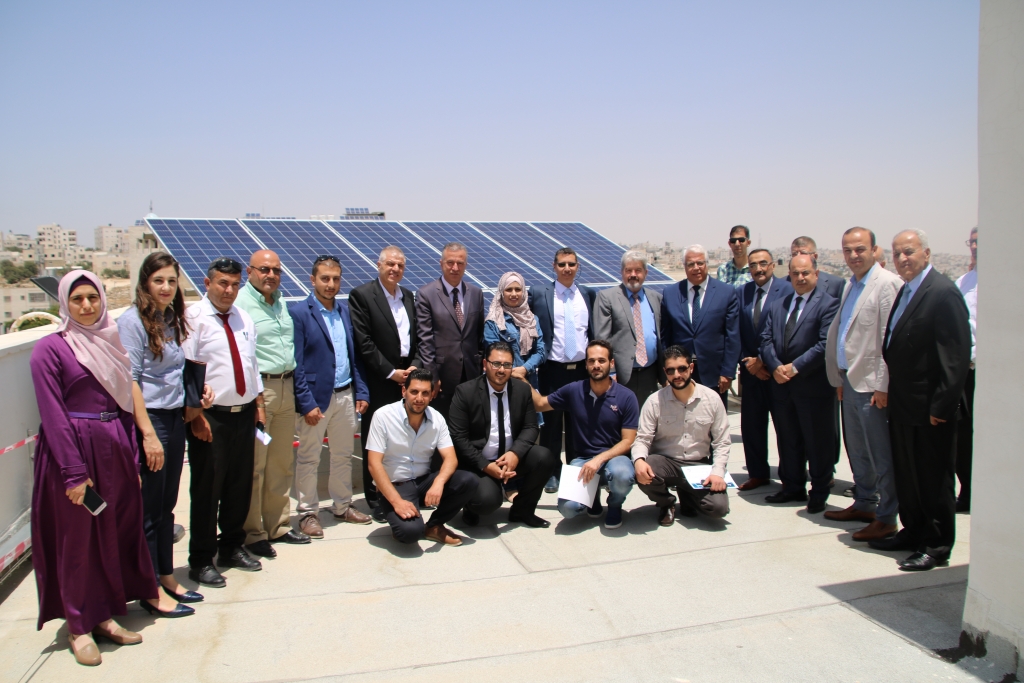 Palestine Polytechnic University has celebrated the completion of the solar energy project on the University campus at Wadi Hariyya, in the presence of the Head of the Palestinian Solar Energy Project Mr. Mark Siles, the Chairman of Hebron Chamber of Commerce and Industry Mr. Mohammad Ghazi Herbawi, the Vice President of Hebron Municipality engineer Yousef al-Ja’bari, and the General Director of Hebron Electricity Company engineer: Abdel-Raouf al-Sheikh. The ceremony was also attended by the President of the PPU Prof. Imad Khatib, the University vice presidents, the Director of Industrial Synergy Center Dr. Luay Shaheen, other key staff members of the Palestinian industry and business associations and representative from the Palestinian Energy Project, and the University faculty members and students.

The project will provide solar energy through the installation of solar panels on the roofs of the University’s four buildings at Wadi Harriya in Hebron. The electricity generated by this system will provide almost half of the University needs.  The project is funded by USAD under the Palestinian Energy Project which seeks to raise public awareness of the benefits of renewable energy throughout the West Bank and in collaboration with the PPU.

Mr. Mark  started the ceremony by welcoming the attendees and pointing out that the installation of solar panels on the buildings roofs aims to produce electricity and link it with Hebron Municipality Electricity network, as well as using  this generated electricity inside the University buildings and getting benefit of its surplus.

Then Dr. Al-Khatib stressed the benefits of solar energy as both a sound financial investment and a positive impact on the environmental future of the community. He also noted that this investment can be easily replicated by private companies and institutions throughout the West Bank.

After that Dr. Shahin gave an overview on the solar energy project related to its production capacity, the total cost, the area on which the system was constructed, the benefits and the possibility of using it for academic and research purposes.  He also pointed out that the project would reduce the costs of electricity of the University to the half and that the university would apply the cost savings towards twenty annual scholarships for solar engineering students, ten female and ten male students, over the next decade.

As well in their speech, Mr. al-Herbawi stressed the importance of this project to the Palestinian people  with a goal in mind to transform energy consumers into producers and balance development and the environment to preserve the right of future generation to live in a clean, and healthy environment and ensure sustainable future for us and our future generation. Engineer al-Ja’bari also expressed his admiration for this  project and he  referred to an agreement between Hebron Municipality and the Chairman of the Board Directors of the Palestinian Investment Fund to implement the project of building solar energy systems on the roofs of schools located within the Hebron electricity concession area. He also pointed out that the costs of the project amounted to approximately 4 million dollars and that this agreement included a project development company located in the city of Hebron and  its responsibility was to build these systems on the schools that were selected, operated and maintained in cooperation with the Hebron electricity crews.

Engineer al-Sheikh also stressed the importance of solar energy projects which would lead to energy independence  and reduction in the import of  electricity from Israel. Also, engineer Tariq Abu al-Feilat, the Director of Public Relations and Marketing at the Wafa Company for Plastic Industries, , pointed out that such projects would create job opportunities in this field and reduce the production costs on the industrial facilities.

At the end of the ceremony, training certificates were distributed among the PPU’s staff in charge of maintenance and management of the solar system. After that the guests toured the roof of the University administration building and inspected the solar system on the ground.

It is noteworthy that Solar power generation is a growing trend within the private sector for benefits such as cost savings and investment opportunities. Also, this event marks the first in a series of upcoming events and workshops hosted by the USAID-funded Palestinian Energy Project and Palestine Polytechnic University for companies and institutions interested in learning more about the benefits of renewable energy.